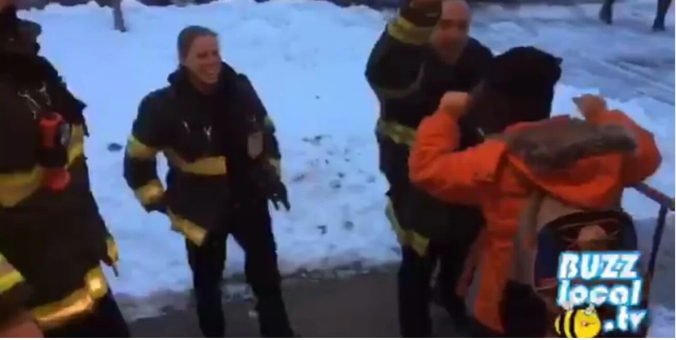 I’m not exaggerating when I say this post from Jason Tremere of New Brunswick in Canada is the most uplifting story I’ve read in a while.
The firefighters of Moncton, on the east coast of New Brunswick, volunteer their time to read with students at Bessborough School – which, if you ask me, sounds like a great place to learn.

We all know kids are fascinated by fire trucks and the brave men and women who go out all hours of the day and night to help people, often putting their lives on the line. So if a firefighter walks into a classroom with a book, he or she will likely have a captive audience!

And as noted in the story, many boys are in desperate need of positive male role models. If a man they admire is encouraging them to read, that can make a world of difference.

The mother of Jakob, the exuberant little guy who won a ride to school in a fire truck, told Tremere:

(Principal) Mr. (Nick) Mattatall at the assembly held on Thursday was saying some of the firefighters would go in to volunteer to read after just working a 24 hour shift which is amazing cause I’m sure at that point sleep would be nice, but they would still go to the school to read. Which to me is inspirational.

The video of the exuberant little guy who won a ride to school in a fire truck is just the cherry on top of this awesome story. Tremere has sent his post to Ellen DeGeneres, who is known for sharing feel-good news on her show.

I really hope you’ll take the time to watch the video and read at least part of the article (it’s a bit long, but so worthwhile).

2 thoughts on “Firefighters fighting for literacy: Oh, my heart…”